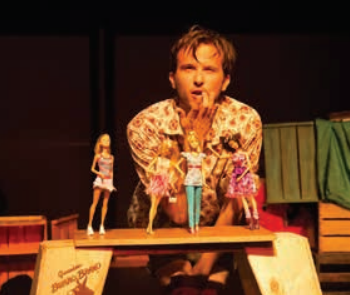 Mildred’s Umbrella Theatre presents
Well, a play by Lisa Kron. Funny and touching, this comedy is about mothers and daughters, mind over body, social activism and theatre itself. Lisa, the onstage playwright, attempts a memory play about her force-of-nature mother, Ann, who though constantly ill manages to heal a community. As the carefully crafted narrative unravels, we find what it takes to get a group of people in any setting to improve their mutual well being. Through February 3. Thursday through Saturday, 8 p.m. Sunday, January 28, 3 p.m. Pay what you wish, Monday, January 29. Spring Street Studios, Suite 101, 1824 Spring Street. Tickets: 832-463-0409.

a.d. players presents
Best of Enemies, based on the bestselling book by Osha Gray Davidson. It tells of a Ku Klux Klan member and a civil rights advocate clash become unlikely friends in a true story of racial tension and reconciliation set in Durham, North Carolina. Strong language and racial slurs; not appropriate for children. Through February 4. Wednesday through Saturday, 7:30 p.m. Sunday, 2 p.m. 5430 Westheimer Road. Tickets: boxoffice@ADPlayers.org or 713-526-2321

Stages Repertory Theatre presents
The regional premiere of Alma en vent (Soul on Sale) by Philip Boehm, in which painter Arcadio Rogers Rodriguez has made quite a name for himself crafting images. But what does it take to really bring a canvas to life—a visit from your dead mother? A Faustian deal with a devilish muse? The play is a lyrical, magical, realist examination of the cost one Latino artist has to pay to save a soul. For mature audiences. January 24 through February 11. Wednesday and Thursday, 7:30 p.m. Friday, 8 p.m. Saturday, 2:30 and 8 p.m. Sunday, 2:30 p.m. Stages also presents the world premiere of Josh Inocencio’s solo show, Purple Eyes, an ancestral autobiography honoring four generations of Mexican men through the playwright’s own queer imaginings. Mexican machismo collides with understanding and acceptance as Inocencio explores his heritage and his voice as a queer Chicano in this poetic celebration of familial love and sexual identity. February 1, 7:30 p.m. February 4, 2:30 p.m. 3201 Allen Parkway. Tickets: StagesTheatre.com or 713-527-0123.

Obsidian Theatre presents
For Colored Girls Who Have Considered Suicide when the Rainbow is Enuf, the groundbreaking “choreopoem” written by Ntozake Shange. A nominee for a 1976 Tony Award nominee for Best Play, it is a spellbinding collection of vivid prose and free verse narrative capturing the brutal, tender and dramatic lives of black women. Directed by Dabrina Sandifer. January 25 through February 17. Thursday through Saturday, 8 p.m. Saturday, February 10, 2 p.m. Industry Night: February 5, 8 p.m. 3522 White Oak Drive. Tickets: ObsidianTheater.org or 832-889-7837.

The tumultuous beginning of Lyndon Baines Johnson’s presidency was dramatized by Robert Schenlekkan in his Tony Award-winning All The Way, seen as a spectacular alley theatre production last season. The LBJ journey continues in part two, The Great Society. From 1965 through 1968, LBJ struggles to fight a war on poverty even as his war in Vietnam spins out of control. Besieged by political opponents, Johnson marshals all of his political wiles while the country descends into chaos over the war and backlash against civil rights. Directed by Kevin Moriarity. January 26 through February 18. Alley Theatre, 615 Texas Avenue. Tickets: 713-220-5700.