A fish rots from the head down. Many people were dismayed that a White House staffer, when speaking about Senator John McCain, would say, “It doesn’t matter. He’s dying anyway.” Kelly Sadler’s revolting remarks are a result of the culture of the current administration. Without going into a litany of his transgressions, when Donald Trump was elected president despite what the nation already knew of him, it is no surprise that we get a staffer who makes jokes about a terminally ill American hero.

“I don’t understand what kind of environment you’re working in when that would be acceptable and then you can come to work the next day and still have a job,” Meghan McCain said on The View.

“People have wondered when decency would hit rock bottom with this administration,” former Vice President Joe Biden said in a statement. “It happened yesterday.”
Here are some of the posts we’ve been reading on the Houston Rainbow Herald Facebook page. 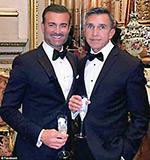 One never knows what goes on behind closed doors. The bodies of two men found dead in their Greenway area home on May 3 have been identified as Rene Ruiz, 62 and Benjamin Ruiz, 52. The couple, together for 22 years were victims of a murder/suicide, reports Click2Houston.com.

“An autopsy report shows Benjamin Ruiz died of a gunshot wound through his mouth as a result of suicide, while Rene Ruiz died of gunshot wounds to the head, torso and his right lower extremity as a result of a homicide. According to investigators, the men were going through a divorce and the $1.5 million home where they were found had been put up for sale hours before the shooting. Neighbors said the men had recently moved out,” reads the news report.

Austin bomber may have been closeted gay man
Religion has a way of messing with people’s minds, especially youth struggling with identity issues. Mark Conditt who killed himself in his car on March 27 struggled with his conservative Christian background and used social media apps to connect with gay men, reports the Austin Statesman. The paper’s sources said police have uncovered evidence that Conditt, responsible for killing two Austin area residents via homemade bombs, used Grindr to connect with gay men in the weeks before his bomb attacks.

At 17, Conditt wrote in a homework assignment that homosexuality is “not natural,” mirroring the teachings of his deeply conservative upbringing, according to investigators.

Fired lesbian teacher sues
She’ll have her day in court. Stacy Bailey, an elementary school teacher in Mansfield ISD was suspended last year and reassigned to teach at a secondary school. Her offense: showing students a photo of the woman who is now her wife, reports HuffingtonPost.com.

At a school board meeting some parents accused Bailey of promoting “the LGBTQ agenda.” She is a two-time recipient of the Dallas area district’s Teacher of the Year award and had been given excellent performance reviews.

Bailey believes the school district, along with its superintendent and associate superintendent, discriminated against her because of her sexual orientation. She filed suit in the Northern District of Texas federal court on May 8, seeking punitive damages, an apology and reinstatement at her previous school, according to The Fort Worth Star-Telegram.

High school lesbians protest prom votes
If it’s prom season, it must be time for controversy. Seniors Sam Washburn and Shenta Knox both ran for prom court at Katy’s Morton Ranch High School. They found out a few days before the big event they did not make the cut but they say they’ve been given conflicting reasons as to why, reports ABC13.com. The girls feel they were cut because they are gay.

They were initially told they did not receive enough votes but the assistant principal refused to show them vote totals. After repeated requests to meet with the principal they got a different reason for not making the cut — the girls had a detention for going off campus to buy lunch one day.

Washburn and Knox aren’t buying the reasoning reversal. “Katy ISD responded saying this is not about the girls being lesbians. They say students have to meet three criteria to be on court: they have to have enough votes, have good enough grades and no disciplinary problems,” writes ABC13.com.

Suburban Pride
Pride is sprouting out all over and is evident in the Houston suburbs. The Woodlands will have its first Pride celebration later this year, reports Woodlandsonline.com.

Johnny Trlica is the manager of the Houston Rainbow Herald Facebook page, your source for the latest LGBTQ news and information. Contact him at [email protected]