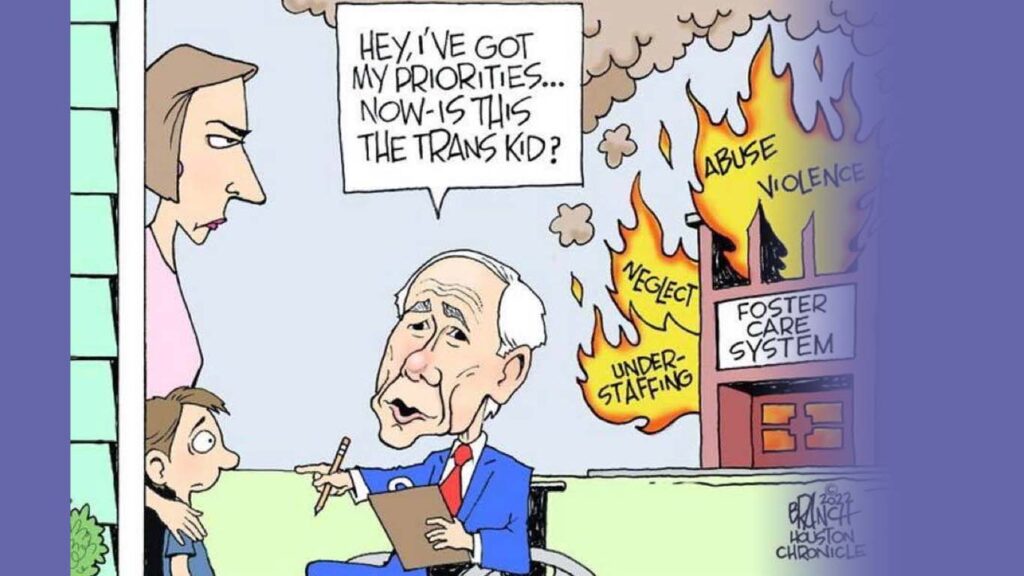 Commentary: Not all Republicans are bigots, but if you’re a bigot, you’re most likely a Republican. Bigots, racists, white supremacists, Confederate sympathizers, and neo-Nazis have found a home in today’s GOP. The only difference between current and past party members is that, unlike years ago, they no longer feel a need to hide it.

Just recently, Texas Attorney General Ken Paxton took time away from attacking transgender kids and their parents to go after Assistant Secretary for Health, Admiral Rachel Levine. She was nominated by USA Today as one of their “women of the year.”

Paxton, who has been accused of felony misconduct multiple times and is currently awaiting trial on fraud charges, got his panties in a bunch, summoned his inner eight-year-old self, and tweeted “Rachel Levine is a man.” Admiral Levine is the first transgender four-star officer in all eight of the uniformed services. She is also the first female four-star admiral in the U.S. Public Health Service Commissioned Corps.

Texas Governor Greg Abbott has ordered state agencies to investigate and prosecute anyone — including parents — involved in providing or enabling medically necessary medical care for transgender youth and teens, using the false claim of “child abuse,” a claim some legal experts say is unlawful and medical experts have condemned.

Abbott, running for re-election against Democrat, former U.S. Congressman Beto O’Rourke, is shamelessly pandering to his base, some of them your friends, neighbors, and yes, family.

Not that it will have an impact on Abbott or his base, but more than 60 corporations, including Apple, Google, and Meta, paid for a full-page ad in the Dallas Morning News. It reads: “Discrimination is bad for business. Our companies do business, create jobs, and serve customers in Texas. We are committed to building inclusive environments where our employees can thrive inside and outside of the workplace.

“The recent attempt to criminalize a parent for helping their transgender child access medically necessary, age-appropriate healthcare in the state of Texas goes against the values of our companies. This policy creates fear for employees and their families especially those with transgender children, who might now be faced with choosing to provide the best possible medical care for their children but risk having those children removed by child protective services for doing so.

“We call on our public leaders — in Texas and across the country — to abandon efforts to write discrimination into law and policy. It’s not just wrong, it has an impact on our employees, our customers, their families, and our work.”

I bet you thought this argument was settled. If anyone in the LGBTQ+ community believed right-wing politicians had accepted that marriage equality was the undisputed law of the land, one only has to listen to Texas Senator John Cornyn’s questioning of Supreme Court nominee Judge Ketanji Brown Jackson.

During his turn to pose questions to President Biden’s pick to the highest court in the land, the Texas senator focused on same-sex marriage. He repeated the phrase “man and woman” more often than Mattress Mac says “free, free, free.” He called the 2015 equality ruling an “edict,” an example of policy-making, and asserted that with marriage equality, the Supreme Court created a right, not in the Constitution.

Cornyn, apparently still not over the SCOTUS removing his right to discriminate, theorized that the 2015 Obergefell v. Hodges decision created a new right that is not in the U.S. Constitution. He questioned the court’s authority to make the decision, as 32 states had passed laws or constitutional amendments against marriage equality. He brought up a conflict with religion, as well.

“When the Supreme Court decides that something that is not even in the Constitution is a fundamental right and no state can pass any law that conflicts with the Supreme Court’s edict, particularly in an area where people have sincerely held religious beliefs, doesn’t that necessarily create a conflict between what people may believe as a matter of their religious doctrine or faith and what the federal government says is the law of the land?” Cornyn asked.

“That is the nature of a right,” Jackson responded. “That when there is a right, it means that there are limitations on regulation, even if people are regulating according to their sincerely held religious beliefs.”

The party for bigots

These are only three recent examples of how the Republican Party’s culture war on the LGBTQ+ community continues. Not mentioned are Florida’s “Don’t Say Gay” bill and the nearly 240 anti-LGBTQ+ laws that have been proposed in state legislatures across the nation just this year.

In addition to banning Critical Race Theory (which doesn’t even exist) in schools, the Lone Star State is removing from library shelves, books dealing with racism or sexuality, the majority of them featuring LGBTQ characters.

Texas is in a race (to the bottom) with other red states to see who can be the most hateful, bigoted, and prejudiced. We cannot afford to let it win!

The views expressed in this article are entirely those of the writer and do not necessarily reflect the views of MONTROSE STAR. Johnny Trlica is the administrator of the Houston Rainbow Herald Facebook page. Reach him at [email protected]