About a year and a half ago, I was in a dark place. After a painful separation from the love of my life, I felt not only completely broken inside but also scared as hell. And I needed a job, pronto. After all, I was a single mom now and I had mouths to feed.

After weeks of job searching and getting turned down for employment by both Target and a local RV dealership, you could say my sense of self-worth wasn’t the greatest. I was on the verge of turning 40, jobless, broke, and very, very sad. At that point, I lacked the motivation to even try to apply at another crappy job that I didn’t want. But the what the hell was I going to do?

Well, I did the only thing you can do when life has you by the huevos and you’re doing the best you can, despite the overwhelming odds against you at the moment – I left it to the Universe. I very consciously put out this “wish” of sorts; this hope, this prayer: Let me find a job that needs me as much as I need it, and that has the ability to grow into something more.

Another couple weeks passed. Still nothing. And then one day I saw the ad for an “editorial assistant” with a telecommuting option (basically, single mom heaven). I have always loved writing and been interested in journalism but never had an opportunity to pursue it – so with zero professional experience and only an old blog to show as examples of my writing – I went for it. And somehow, out of 2,000 some-odd applicants, I got the job.

It certainly seemed that the Universe had answered my call. Within a couple months I was promoted to assistant editor, and a few months after that to an associate editor, now writing and editing for three national publications. One of these is Plus magazine, a health mag that focuses on all aspects of living with HIV – from the latest treatment breakthroughs to discussing stigma and mental health.

Of course, like most of us, I had known a few people affected by HIV in my life, but sadly – growing up in the ’80s, before the development of today’s very effective antiretroviral therapy – you often found out after it was too late. The reality is, right up until today, stigma still prevails and many people living with the condition fear “coming out” as poz. And many aren’t truly able to do so safely in their lives. 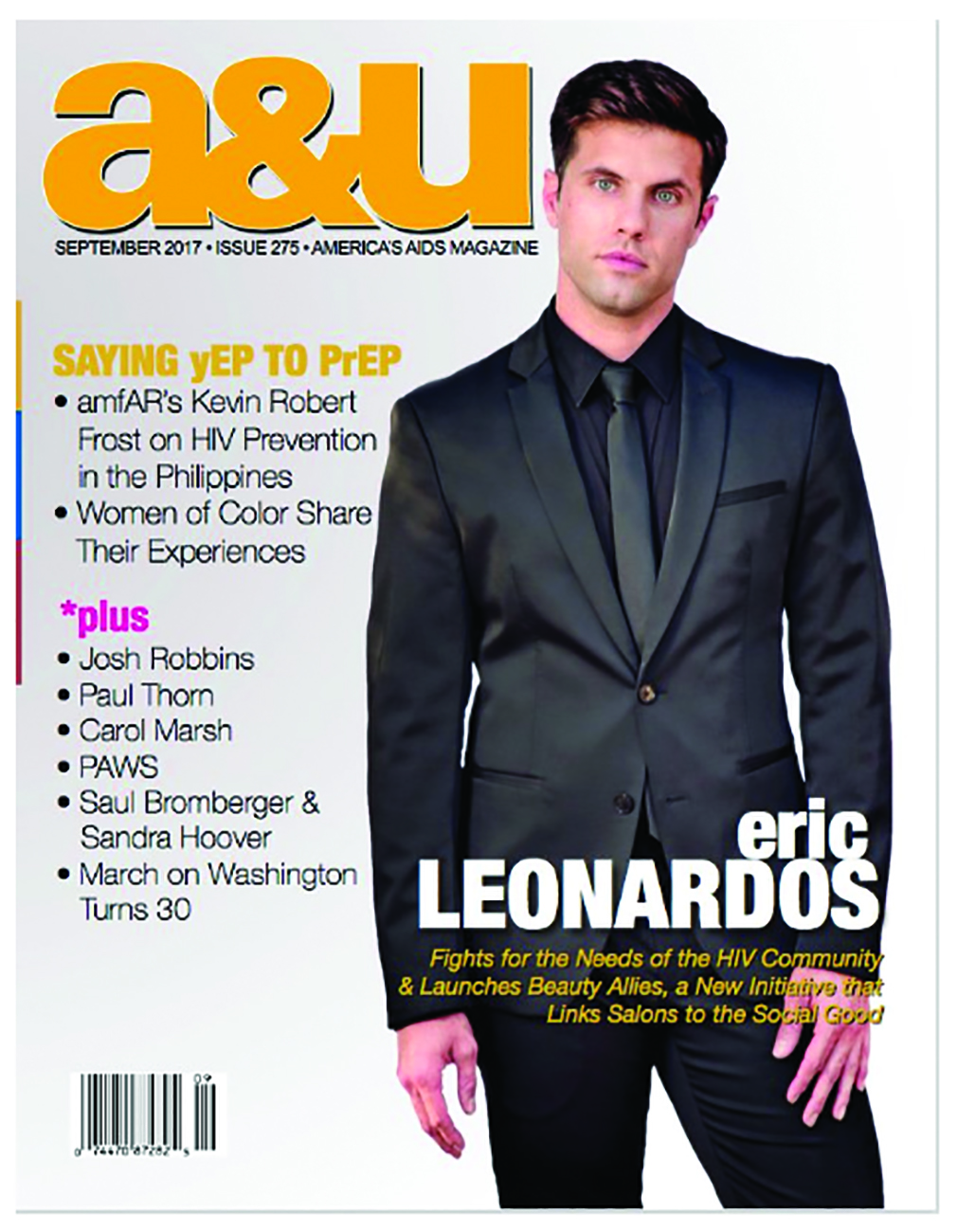 However, there are still many others who bravely choose to go public with their status as a direct response to this stigma. One of the first people I interviewed for Plus was Eric Leonardos, a Los Angeles-based celebrity hairstylist. On a whim, Leonardos took an opportunity to appear on the Logo reality dating series, Finding Prince Charming. Not only did the handsome and charming Leonardos “win” the show by being chosen by the show’s featured eligible bachelor, Robert Sepulveda Jr., he made history by opening up about being poz on one of the episodes.

Though the relationship didn’t last (but ended on friendly terms), the impact of Leonardos’ coming out on television continues to be felt. Not only did Leonardos tell the world he was not ashamed to be living with HIV, but the fact that Sepulveda didn’t let his status (or fear of the stigma attached to dating someone who is poz) dissuade him from wanting to pursue a relationship with Leonardos was monumental.

Since coming out poz, Leonardos has not only continued to thrive in his career in the world of beauty and fashion, he has become a quietly fierce activist for people living with HIV and other marginalized people. He is often asked to speak at events and share his story, which – as a gay conversion therapy survivor from Bible-Belt Texas – includes much more than just his diagnosis. Leonardos’s brave decision to go public lead to remarkable things in his own life, but it also led to great change in my own.

It was through getting to know Leonardos and his story that the perspective on my own situation began to change. Seeing how much he dealt with at an early age, and not only overcame but persevered in spite of, sort of shook me off my “pity pot,” so to speak. Sure, as a teen parent and abuse survivor, I had been through my share of harsh realities – but perhaps that is why Leonardos’ story inspired me so. I could relate.

As two people from different parts of the country, who had very different cultural upbringings, I was surprised at my connection to him. The shame and rejection he felt as a gay teen sent away to be “cured” wasn’t dissimilar to what I had experienced, at least emotionally, as a frightened pregnant teen from a Catholic family sent away to a continuation school.

And there’s the all-powerful stigma. The paralyzing fear of the world treating you like less. Though I certainly am not claiming I know what it’s like to deal with HIV stigma firsthand, Leonardos’ story is powerful and relatable.

I have now interviewed dozens of other poz folks, some famous, some not. Many just regular folks busting their ass every day in the trenches in the fight against HIV, but each with an inspiring story. Those people are thriving, not sitting around feeling sorry for themselves. They have demonstrated to me and countless others that no matter what hand life has dealt you, a positive attitude and an open heart and mind – and a caring support team – are all you need to make it through.

Desirée Guerrero is the associate editor of Plus magazine. This column is a project of Plus, Positively Aware, POZ, TheBody.com and Q Syndicate, the LGBT wire service. Visit their websites – http://hivplusmag.com, http://positivelyaware.com, http://poz.com and http://thebody.com – for the latest updates on HIV/AIDS.