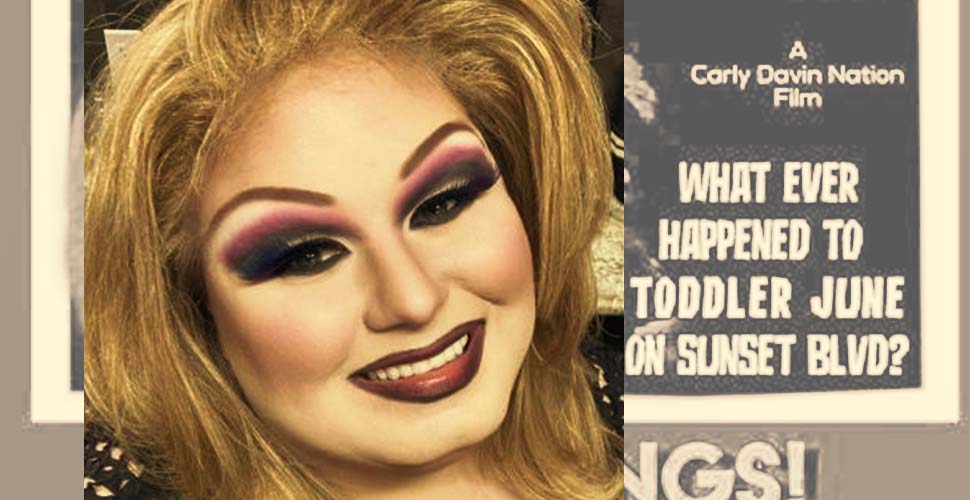 Galveston’s multi-talented Carly Davin Nation has done it again! After months of writing, acting, directing, and filming, the mash-up film short Whatever Happened to Toddler June on Sunset Boulevard, has been released and like Onyxfire’s other productions, the movie is a huge hit, especially with the LGBTQ community. Like she did with Aluminum Gardenias and the series Dragtown, the Galveston native has once again reassembled her stellar cast of actors and, combining them with her overtop artistic skills, has produced a top-notch film short with a dark comic parody nature.

If “Eat ya din-din” and “rats in the cellar” ring a bell, and if an aged silent movie star hoping for a comeback, a splash of sibling rivalry and murder also ring a bell, then you are on the right track. Combining the insane characters from two of the greatest movies ever, Whatever Happened to Baby Jane and Sunset Boulevard, Nation wrote and created the riveting script that drips the viscous ooze that permeated the two original classic stories. With some name changes and few creative additives here and there, the film short, from beginning to end is sure to thrill any fan of the two cinema greats from the past. “Camp with a capital C” is the best way to describe the lively ensemble of characters that appear in Hart’s combined version of the original masterpieces.

Written over a period of two weeks, the script spun around in Carly’s mind and underwent many changes and additions as ideas came to her. Nation says, “I had seen Baby Jane so many times and actually I do her in some of my stage work. I love her. I hate to admit it but I had never seen Sunset Boulevard until a while back when Cassie Cass turned me on to the movie.”

Hart said that once she saw the movie, “I knew I had to get those two crazy women together in some story!”

Following the original storylines, for the most part, was easy. However, while filming, many improvised lines and actions that seem to work made it into the final cut. Filmed in black and white, the movie appears to be the real deal from the 1950s and early ’60s. The scratchy, wiggly lines that appear throughout the scenes are a reminder of the shows most older audiences will recall from their earlier years of watching movies and black and white television programs. Though filmed almost entirely in one room with green screens, viewers will be hard-pressed to not think the footage was shot on location in an old Los Angeles neighborhood. Only the final scene, the beach scene, was actually filmed outdoors on location and of course, that was on a Galveston Beach. Nation says the filming took over ten months and was a great way to spend “quarantine downtime.”

Returning to the eclectic line-up of actors is of course Carly Nation as Toddler June Munson, the once-famous child star that longs to return to the stage. The role of tortured former star and abused sister Ranch Munson is played by Cassie Cass, as well as the parts of Mack, Desmentia’s butler, and the network announcer for the television station, KLIT. Faded silent film star Bora Desmentia is played by a very convincing Clair Schuler (aka C.C. Ryder) and the maid, Elvirus Covidia, is portrayed by Galveston’s talented Destiny Dion Van Wales. Joe Edwin, the hunky man that gets caught up in the absurd quagmire and ultimately is murdered (and gets a high rising boner in a bed scene) is Galveston’s cute Chris Monteith. Richard Touchstone appears as the john to whom June has pimped out her invalid sister Ranch. The very handsome Jesse Garza appears as Anis (pronounced “anees”, not “anus”), the sexy actor appearing in a romantic scene with Ranch in one of her old movies being rescreened on a television matinee program. The two rag-tag policemen chasing Toddler June in the final scene at the beach are played by Jason Stiles and Touchstone. All together this roster of Galveston’s talented LGBTQ community members makes the film short into a well-orchestrated train wreck that devotees of Baby Jane and Norma Desmond will enjoy and be drawn in until the very end. For fans of the original movies, the 32 minutes fly by and most will be found wanting more footage from this cast.

The nation uses some great techniques, innuendos, and twists on original themes and lines to create a film short that is filled with dark comedy and wicked charm. Of particular interest is the rat that is seen running along the lines of the house at various times and appears to grow larger with each passing. Speaking of rats, the scene with Bora being served the dead rat as a meal was supposed to end with her shaking the salt and pepper shakers over the deceased carcass. As Cass was inspired, she went on to ad-lib and improvise the eating of the rat, tail, and all. Nation liked this so much, it was kept and added to the completed scene shots.

Of the cast, Nation says, “This cast is so great. Everyone knows each other well, understands our moves and body language, that just works and quite well.” When asked if there would be a reel of outtakes and bloopers to follow in the future, as there must be with a show like this, Nation replies, “Oh my God yes! There were so many fun things that just cracked us up and brought us to tears laughing or snapping at each other. Tremendous fun on the set and caught on film.”