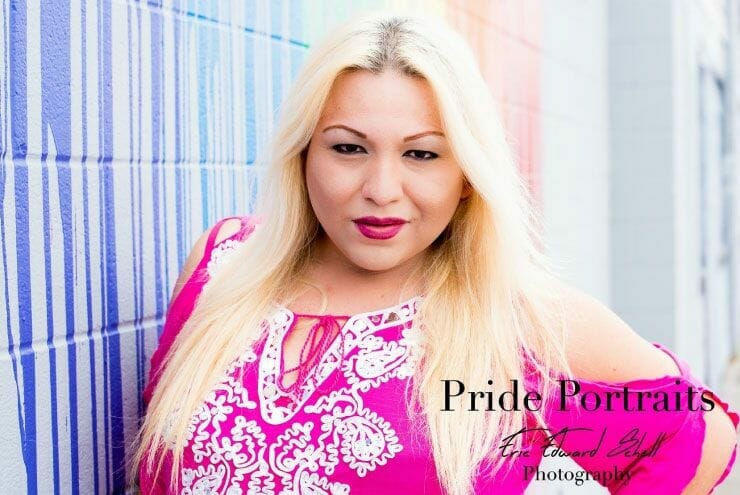 “We are striving to be more visible now. Our community has been here for a long time and we have faced so much oppression…we must continue to build networks, bridges, and protections and expand our resources.” -Ana Andrea Molina, founder and executive director of the Organización Latina de Trans en Texas (OLTT)
Photo by Pride Portraits/Eric Edward Schell Photography

Houston, Texas is a buzzing hub of LGBTQ non-profit organizations. On one end of the spectrum, local chapters of larger, national organizations geared toward the see-and-be-seen crowd are able to raise thousands of dollars in one evening; on the other end exists a myriad of smaller nonprofits led by people of color, serving people of color, that provide resources, programming, and life-saving services to the most marginalized populations, yet often get lost in the shadows.

Organización Latina de Trans en Texas, better known as OLTT, is a Houston-based non-profit organization that provides life-saving resources to the trans Latinx community. The organization was founded by Ana Andrea Molina, an undocumented trans Latina, who currently serves as the organization’s executive director. One of the main services OLTT provides is housing for Latina trans women at the organization’s shelter, Casa Anandrea. In 2018 alone, the organization was able to provide housing to 120 trans Latinas throughout the course of the year. Molina adds that, in the aftermath of Hurricane Harvey, many shelters were not welcoming or affirming of trans individuals seeking refuge. “Casa Anandrea was able to be a home to 50 women who did not feel safe in the mainstream shelters,” she says.

OLTT is gearing up for one of their biggest fundraisers of the year, Miss & Mr. Trans OLTT 2019-2020, which will be held on April 19, 2019, at Crystal Nightclub. Funds raised by the event will directly help OLTT to achieve a sustainable operating budget, as the organization is currently under budget in terms of yearly rent costs for Casa Anadrea. Molina shares that the organization currently has $16,000 in funds, and needs to reach $23,000 to cover rent for 2019. This doesn’t include maintenance, she adds, which means there is no extra money for additional resources or programming. Each day, their budget is used to provide bare necessities, such as food. She shares that, while OLTT does receive grant money from two sponsors, funds fall significantly short of the projected $98,000 annual budget that would allow the organization to be fully operational with both housing services and regular programming.

However, Molina is adamant that closing the shelter’s doors is not an option—hence the fundraiser. Additionally, OLTT thrives on volunteers, and she encourages those who cannot give financially to donate their time to the organization. OLTT operates primarily on word of mouth, as there is no money for marketing or advertising buys, but the group has seen exponential growth since its beginning—its first year in operation, the organization had 15 members; now, it boasts over 500.

The Miss & Mr. OLTT fundraiser also serves as a chance to crown two winners with the title of Miss and Mr. OLTT, separately. The individuals crowned will act as ambassadors of OLTT, serving as representatives of the organization at national conferences and other major events. The winners will also receive a cash prize—modest but very much appreciated, Molina says. This is OLTT’s way of saying thank you to these individuals for their selfless work and dedication to the organization and trans issues, she adds.

Always aiming to improve inclusion, Molina notes that next year’s competition will also include categories for queer and gender nonconforming contestants. “This is our second year doing Miss & Mr. Trans OLTT,” Molina says. “The first year we didn’t have any trans men who entered the contest, which is understandable, as visibility in our community can be a great risk. We are striving to be more visible now. Our community has been here for a long time and we have faced so much oppression, even when Obama was in office. They took so much from us, even our fear, so we must continue to build networks, bridges, and protections and expand our resources.” This year, OLTT has three trans men and eight trans women entered to compete.

Molina explains that the fundraiser will open with a runway presentation featuring all of the contestants. The female contestants will all be dressed in Victoria’s Secret outfits—an intentional statement against the company leadership’s transphobic views. “We are making the bold statement that all women are worthy of Victoria’s Secret,” Molina says. “We are an inclusive organization and we want to reflect that. The participants this year are from all walks of life and may not be the stereotypical Victoria’s Secret girl, but that’s okay.”

An evening gown competition and a question-and-answer round will then follow. All questions asked will relate to trans advocacy and issues. The goal is for the contestants to relay eloquent, direct, and strong answers, as talking about OLTT’s work not only impacts Houston, but all of Texas.

This year’s fundraiser touts an impressive judges panel, comprised of founders of national trans organizations, a celebrity fashion designer, a transmasculine activist, a notable drag queen, and Tony-award winner and Grey’s Anatomy star Sara Ramirez. Molina notes that all of these judges are lending their time and services for free, all out of care for OLTT.

Ramirez and Molina first met two years ago during the Texas Legislative Session, where Ramirez was a guest speaker for the ACLU. In her speaking agreement, Ramirez had one requirement—that she would have the opportunity to meet with a trans Latina activist. Molina, being the obvious choice, was asked to a private meeting with Ramirez. Molina insisted that the other OLTT women join her for the conversation. “Sara came in and introduced herself, and asked if I happened to know her from her work on TV or theatre,” Molina says. “I told her that I didn’t know her, and that I was sorry. I let her know that I don’t really watch much TV because I don’t understand much English. Sara understood and we talked for a long time about OLTT and how important the work is. Sara said that she would love to help somehow. I remember thinking, ‘She must be a privileged person wanting to meet a poor Latina trans woman for a social media picture.’ Funny thing is, we never took a photo, and two years later, we have a wonderful personal and professional relationship. She actually cares; she is the real deal.”

Ruby Coronado, also on the judges panel, is the founder and CEO of Casa Ruby, a D.C.-based multicultural, bilingual, LGBTQ safe space providing food, shelter, and numerous other health-related services. Most recently, Coronado drove to San Antonio to meet a group of Salvadoran, Honduran, and Nicaraguan migrants in the custody of U.S. Immigration and Customs Enforcement. Coronado drove these 15 migrants from San Antonio back to D.C., where she is currently providing them with housing and vital resources.

Bamby Salcedo, nationally recognized Latina transgender activist and founder of the TransLatin@ Coalition, will also grace the OLTT judges panel. Salcedo is the star of the documentary TransVisible: Bamby Salcedo’s Story, and one of the prominent trans figures in HBO’s, The Trans List. Most recently, Salcedo organized the very visible pro-trans-rights flag unfurling at Doger Stadium, with the words “Trans People Deserve To Live.”

So often, only a small portion of the money raised at larger events gets directly dispersed into Houston’s LGBTQ community. There are so many smaller organizations in the city that are doing on-the-ground, direct-service work within our community’s most marginalized groups, and they serve as a reminder of why we do this work in the first place. OLTT is a shining example of the importance of giving and donating locally, and they deserve your support.