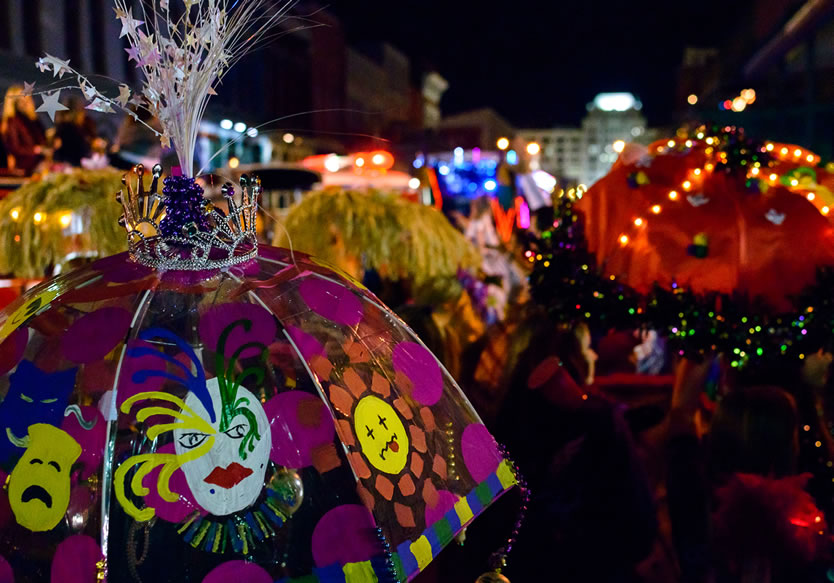 It’s hard to imagine, but with the winter holidays having passed, it is time to blow the dust off the beads and get ready for Mardi Gras 2018! Following the liturgical calendar, the highly anticipated festival comes very early this year and, with it, all the fun and festivities that have made Galveston Island a much-loved Mardi Gras destination.

This year the huge celebration kicks off Friday, February 2 and continues through Tuesday, February 13 (or Fat Tuesday, as it is better known). With over 40 scheduled parades and dozens of balls and parties, the Island once again plays host to locals, visitors and guests that come from all over to revel in the fun and craziness that abound during Mardi Gras. Over the span of several days and nights, tons of beads are tossed from beautifully decorated floats and brightly adorned vehicles that wind through the oak and palm-lined streets of the Island.

With its island roots dating back to 1867, Mardi Gras Galveston has become very popular across the United States and is perhaps second only to the seasonal celebration in New Orleans. There are carnival celebrations all over the globe, but most will agree Galveston and New Orleans are the biggest and best American locations in which one can participate in the joie de vivre that is Mardi Gras. Just about everyone and everything imaginable are decked out in the traditional tri-colors of the festival. In 1872, Rex, the King of Carnival (New Orleans), chose the official Mardi Gras colors: green to represent faith, gold to represent power and purple to represent justice. To this day, these colors remain a strong, iconic symbol of Mardi Gras.

With so many parades scheduled, it’s just sort of hard to keep up with what, when and where. A huge listing and a map will be published in the Daily News, as well as listings of events at Galveston.com and MardiGrasGalveston.com. The parades you don’t want to miss are the Mystic Krewe of Aquarius Parade on Saturday, February 3 at 12 noon and Krewe of Gambrinus at 6 p.m. Sunday, February 4 brings Fiesta Gras with the Mega Fiesta Gras Parade at 4 p.m. Friday, February 9 (Salute to Texas-First Responder Day) features the Danny Weber Memorial Fire Truck Parade at 7 p.m., the All Krewe Parade at 8 p.m. and, at 9:30 pm, the Krewe da Yaga’s Parade. Several parades roll on Saturday, February 10, including the Krewe d’Esprit Rosaire Parade at 11 a.m., King’s Parade at 2:30 p.m. and the much-anticipated Knights of Momus Grand Night parade at 6:30 p.m. Sunday, February 11 (Family Gras) features the Shriners Hospital for Children & Sunshine Kids Parade at 12 noon and the very popular Krewe of Barkus and Meoux Parade at 1:30 p.m. The Mardi Gras Children’s Parade follows at 3 pm.

The craziest and biggest celebration takes place on Tuesday, February 13 at 6:30 p.m.—the Mystic Krewe of Aquarius 22nd Annual Fat Tuesday Parade. This is the parade were everyone goes nuts. It is Fat Tuesday and the last chance to let it all hang out (sometimes, literally) before Ash Wednesday, the next day. As Wednesday is the beginning of Lent, some folks feel they’ve got to play while they can and get the debauchery out of their system before the holy ashes touch their foreheads. All in all, the parades offer a great time for family and friends to enjoy one of the greatest traditions of Mardi Gras.

Besides the parades there is music and lots of it, heard all throughout the downtown and Strand areas. Some of the venues require and entry fee or ticket, however parades are free as is most other activities. Mardi Gras headliners on the Sangerfest Park stage at 23rd & Strand this year include Everclear on Saturday, February 3 at 5:30 p.m., La Mafia on Sunday, February 4 at 2:30 p.m., Jason Cassidy on Friday, February 9 at 8:30 p.m. followed by Kevin Fowler at 10:30 p.m. The Electric Stage at 21st and Strand hosts Made Monster on Saturday, February 3 at 11 p.m.

Typical for Galveston, Mardi Gras also offers a little something for everyone with balcony parties, private parties, black-tie gatherings, formal balls and debutante presentations, contests and, of course, a steady flow of libations. The three “gay bars” on the island—23rd Street Station, Rumors and Robert’s Lafitte—draped themselves in gold, purple and green with great bar staffs serving up drink specials and making sure everyone has a great time. Mardi Gras is also a time when some fantastic performers climb on stage and thrill the crowds with show-stopping numbers, new and old.

Mardi Gras Galveston is a must-do for anyone who enjoys crowds, adventure and frivolity. Parking can be a problem in areas for some of the parades, so arrive early, dress warm and be safe. When those good times start rolling, make sure you are part of it!