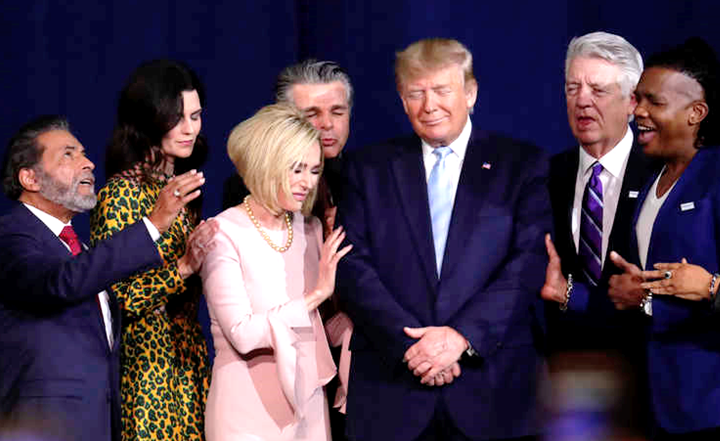 Commentary: Seeing evangelical leaders place hands on and pray over the president has got to be one of the biggest stomach turning images of the new decade, and we are barely into 2020. One can only ask, “Have they lost their frigging minds?”

None of the president’s positives can balance the moral and political danger we face under a leader of such grossly immoral character. At what point does the harm and evils inflicted on a society outweigh the benefits?

In what would be called a “come to Jesus” moment. Christianity Today called for Donald Trump’s removal as president in an editorial by Mark Galli on December 19. The magazine, founded by Reverend Billy Graham, is the leading publication of and for evangelicals. Clearly not all evangelicals read the article.

The call to action should not just apply to evangelicals, however. Non-evangelical Christians and gay Republicans should join the groups who are putting the country over party. Through his administration’s actions Trump has proven himself to be no friend to the LGBTQ community. Christians deserve a better role model.

Given a choice to benefit the U.S.A. or himself, what will Trump choose? We all know the answer to that question yet Trump supporters will deny the obvious.

The Christianity Today column reads in part: “The president of the United States attempted to use his political power to coerce a foreign leader to harass and discredit one of the president’s political opponents. That is not only a violation of the Constitution; more importantly, it is profoundly immoral.

“The reason many are not shocked about this is that this president has dumbed down the idea of morality in his administration. He has hired and fired a number of people who are now convicted criminals. He himself has admitted to immoral actions in business and his relationship with women, about which he remains proud. His Twitter feed alone — with its habitual string of mischaracterizations, lies, and slanders — is a near perfect example of a human being who is morally lost and confused.

“Trump’s evangelical supporters have pointed to his Supreme Court nominees, his defense of religious liberty, and his stewardship of the economy, among other things, as achievements that justify their support of the president. We believe the impeachment hearings have made it absolutely clear, in a way the Mueller investigation did not, that President Trump has abused his authority for personal gain and betrayed his constitutional oath. The impeachment hearings have illuminated the president’s moral deficiencies for all to see. This damages the institution of the presidency, damages the reputation of our country, and damages both the spirit and the future of our people. None of the president’s positives can balance the moral and political danger we face under a leader of such grossly immoral character.”

The column then pointed out what the magazine said about President Bill Clinton during his impeachment and how those words apply to the current president.

“To the many evangelicals who continue to support Mr. Trump in spite of his blackened moral record, we might say this: Remember who you are and whom you serve. Consider how your justification of Mr. Trump influences your witness to your Lord and Savior. Consider what an unbelieving world will say if you continue to brush off Mr. Trump’s immoral words and behavior in the cause of political expediency. If we don’t reverse course now, will anyone take anything we say about justice and righteousness with any seriousness for decades to come? Can we say with a straight face that abortion is a great evil that cannot be tolerated and, with the same straight face, say that the bent and broken character of our nation’s leader doesn’t really matter in the end?

“We have reserved judgment on Mr. Trump for years now. Some have criticized us for our reserve. But when it comes to condemning the behavior of another, patient charity must come first. So we have done our best to give evangelical Trump supporters their due, to try to understand their point of view, to see the prudential nature of so many political decisions they have made regarding Mr. Trump. To use an old cliché, it’s time to call a spade a spade, to say that no matter how many hands we win in this political poker game, we are playing with a stacked deck of gross immorality and ethical incompetence. And just when we think it’s time to push all our chips to the center of the table, that’s when the whole game will come crashing down. It will crash down on the reputation of evangelical religion and on the world’s understanding of the gospel. And it will come crashing down on a nation of men and women whose welfare is also our concern.”

A ‘come to Jesus’ moment

So now, as Christianity Today did in December in asking evangelicals to “call a spade a spade,” we are calling on gay Republicans and non-evangelical Christians to step up. “Remember who you are.” Failure to condemn or in the very least walk away from a presidency so corrupt and without morals and values is tantamount to condoning it.

While leadership in your party goes along with every lie, slanderous mischaracterization, and narcissist tweet, you do not have to do likewise. Step up.

Admitting you were duped by a con man is nothing to be ashamed of; over 62 million of your countrymen were. We are not asking you to leave the Republican party, we are asking you to save it.

Disclaimer: The views and opinions expressed in this article are those of the author and do not necessarily reflect the position of the MONTROSE STAR.